The ADM1260 Super Sequencer® is a configurable supervisory/sequencing device that offers a single-chip solution for supply monitoring and sequencing in multiple supply systems. 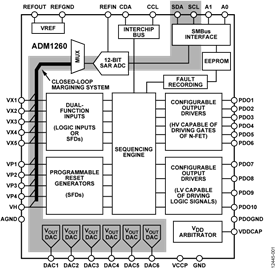 A high speed interchip bus (ICB) allows multiple devices to be easily linked together. It is possible to create a system capable of sequencing up to 40 supplies and monitoring up to 37 supplies. Using the ADI Power Studio™ software, the operation of the ICB is transparent to the user, making multiple devices appear to operate as a single virtual sequencer.

In addition to these functions, the ADM1260 integrates a 12-bit analog-to-digital converter (ADC) and six 8-bit voltage output digital-to-analog converters (DACs). Use the ADC and the DACs to implement a closed-loop margining system that enables supply adjustment by altering either the feedback node or the reference of a dc-to-dc converter using the DAC outputs.

Supply margining can be performed with a minimum of external components. The margining loop can be used for in-circuit testing of a board during production (for example, to verify board functionality at −5% of nominal supplies), or it can be used dynamically to accurately control the output voltage of a dc-to-dc converter.

The logical core of the device is a sequencing engine (SE). This state machine-based construction provides up to 61 different states. This design enables very flexible sequencing of the outputs, based on the condition of the inputs.

A block of nonvolatile EEPROM is available that can be used to store user defined information and can also be used to hold a number of fault records that are written by the sequencing engine, as defined by the user when a particular fault or sequence occurs.